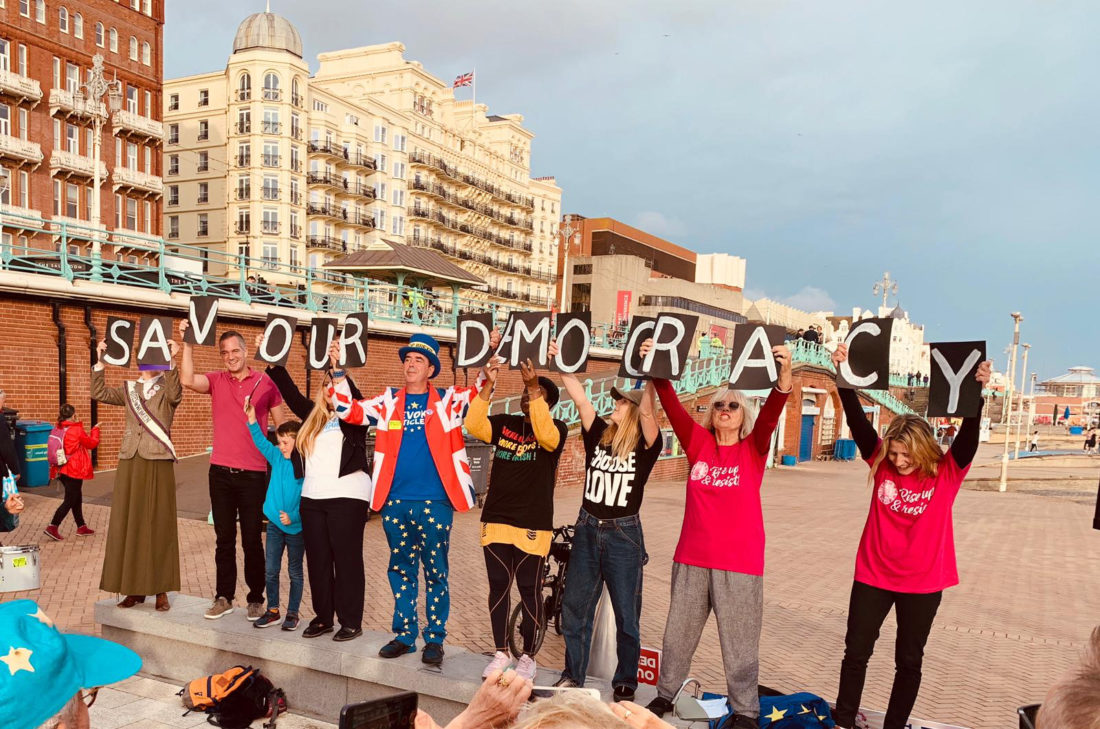 Who hasn’t become more political as a result of the last 3 torrid years in British politics? I’ve got quite heavily involved with a local group called Brighton & Hove for EU and also Women for Europe.

This is me addressing a Women for Europe rally in Brighton during the Labour Party conference. I read a poem by Lawrence Ferlinghetti called Pity the Nation (after Khalil Gibran).

It’s all too easy to spot the liars and bigots in British Politics these days, more’s the pity.

Whatever your views on Brexit no one can argue that the last 3 years has been toxic. The rise in xenophobia and racist hate crime is an indication that nationalism is not the answer. Europe is being being used as a scapegoat for a lot of evils and lies and subterfuge has been a mainstay of the Leave campaign.  Nigel Farage and Dominic Cummings – I am sure the latter hates to be mentioned in the same breath as the former – share the stage and I see little difference between them in terms of their desire to ‘get Brexit done” at any cost, however hate fuelled and unlawful.  There was never a mandate for a No Deal and Mr Johnson knows this and we know that a lot of rich people are going to get a whole lot richer because of his political shenanigans if we crash out.

It is only through a Peoples Vote and listening to the calm and clear sighted voices of reason like local (Brighton) MPs Caroline Lucas and Peter Kyle that we can find a way out of this impasse:  As Caroline Lucas says the issues that Brexit has unearthed and the imbalances throughout the country – poverty and the feeling of being abandoned – need to be addressed, but Brexit is not the answer.  The trashing of something that has brought peace and prosperity to Britain, not to be at that table, not to have a say in the future of Europe – surely this is wrong. Surely Britain’s place in Europe is worth preserving if not cherishing?!  After all who wants Donald Trump’s chlorinated chicken???